The Euroleague Final Four of Basketball

Basketball is the fastest growing team sport in the world! Let’s look at a detailed report recently made by the fans to a top European hoop website and Ulebcup.com during the months of Euro league in February.

It offers a new look at the growing panorama of European basketball, the study specifies the country origins of all visits made to the Euroleague’s official website, the number of page views, the usage by day and hour, plus the hits and total bytes loaded by users of both web pages.

There are 15 countries whose fans have generated more than 75,000 page views, each of which had teams playing in either or both of the competitions (Euroleague and ULEB Cup), with the exception of the United States, which ranked sixth in total page views.

The country from which the most page views were generated was surprisingly Lithuania, with 563,381, followed by Spain 422,802, Poland 403,216, Israel, 354,438, and Italy with 298,811. Completing the top 10 ranking, in the next four positions after the US, are four of the most important markets in Euroleague basketball today: Greece, home nation this summer in the 2004 Olympics, Germany, Turkey, and France. 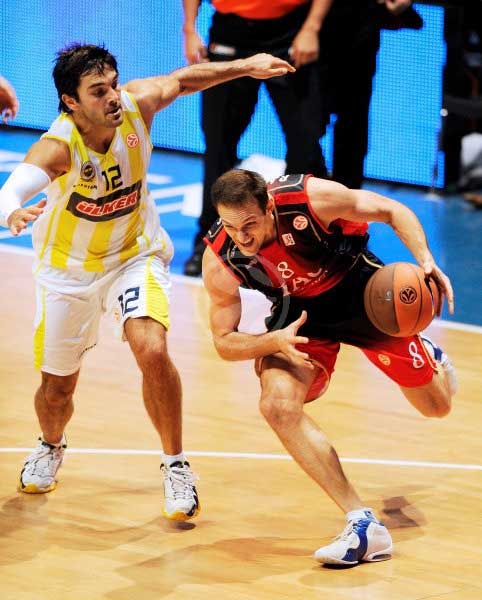 Early season Euroleague Action
Germany has just one team in Euroleague, while France’s two teams are outside the major markets of Paris and Marseilles. These numbers are a strong indication that Euro-hoops are ready to compound at accelerated levels!

Now let me break down the Final Four teams playing this week in Tel Aviv. The opening game April 29 is a all Italian final featuring two Italy’s top teams in series A1, the oldest club in Italy, Montepaschi Siena vs. Skipper Bologna. If you look at the back-court players on both teams, a couple interesting stats become really important: dropping dimes, or making an assist, steals, and three-point shooting from long range.

These stats say a lot when breaking a team down…they rebound the ball very well, which allows them to fast break the ball…they shoot the long-ball…they move the ball unselfishly…overall their veteran players understand what it takes to excel under pressure.

However, Skipper has been a very tough team for a number of good reasons that should make for a classic battle regardless of the final outcome. Skipper’s back-court is dominated by one player, Gianluca Basile, this guy is Mr.everything doing it all, form finishing 13th overall in the MVP scoring throughout the series, to placing 11th in overall scoring with 16 points per contest, to 7th in 3%, 14th-85% from the foul-line.

Basile’s back-court teammate Gianmarco Pozzecco deserves a lot of credit for Basile’s play as they play as a tandem, Pozzecco directs the offence…Basile is the offence. AJ Guyton offers a combo-guard to back both of the Italian players.

I give the slight edge to Siena in the battle of the back-court. Down-low the battle of the “BIGS” Siena has two players pulling down almost 7 boards per game…Mikalis Kakiouzis and one of my favorite players, Roberto Chiacig. Forward Giacomo Galanda shoots the rock from downtown finishing 12th at 50% and is not afraid to bang with the big-boys leading all with almost 5 fouls per game.

Over in Skipper’s team the “BIGS” are lead by Hanno Mottola, Matjaz Smodis. One potential problem for Skipper is their tall center Thomas Van Den Spiegel is injured and that will hurt their chances of dominating the low-post area. Again, edge to Siena.

Skipper is in third place in scoring at 80.7 points per game…the worst rebounding team of the Final Four…tied for the second best blocked shots…but Van Den Speigel is hurt! And their the youngest in terms of experience one gut to look out for is Carlos Delfino!…edge to Montepaschi Siena…a team not many expected to make this far?…well coached…experience…good shooters…unselfish team play…depth…big men inside…my prediction?

The two M’s will meet for the Championship in Tel Aviv, Maccabi Tel Aviv at home will surprise CSKA. For the Final Two break-down, next week!